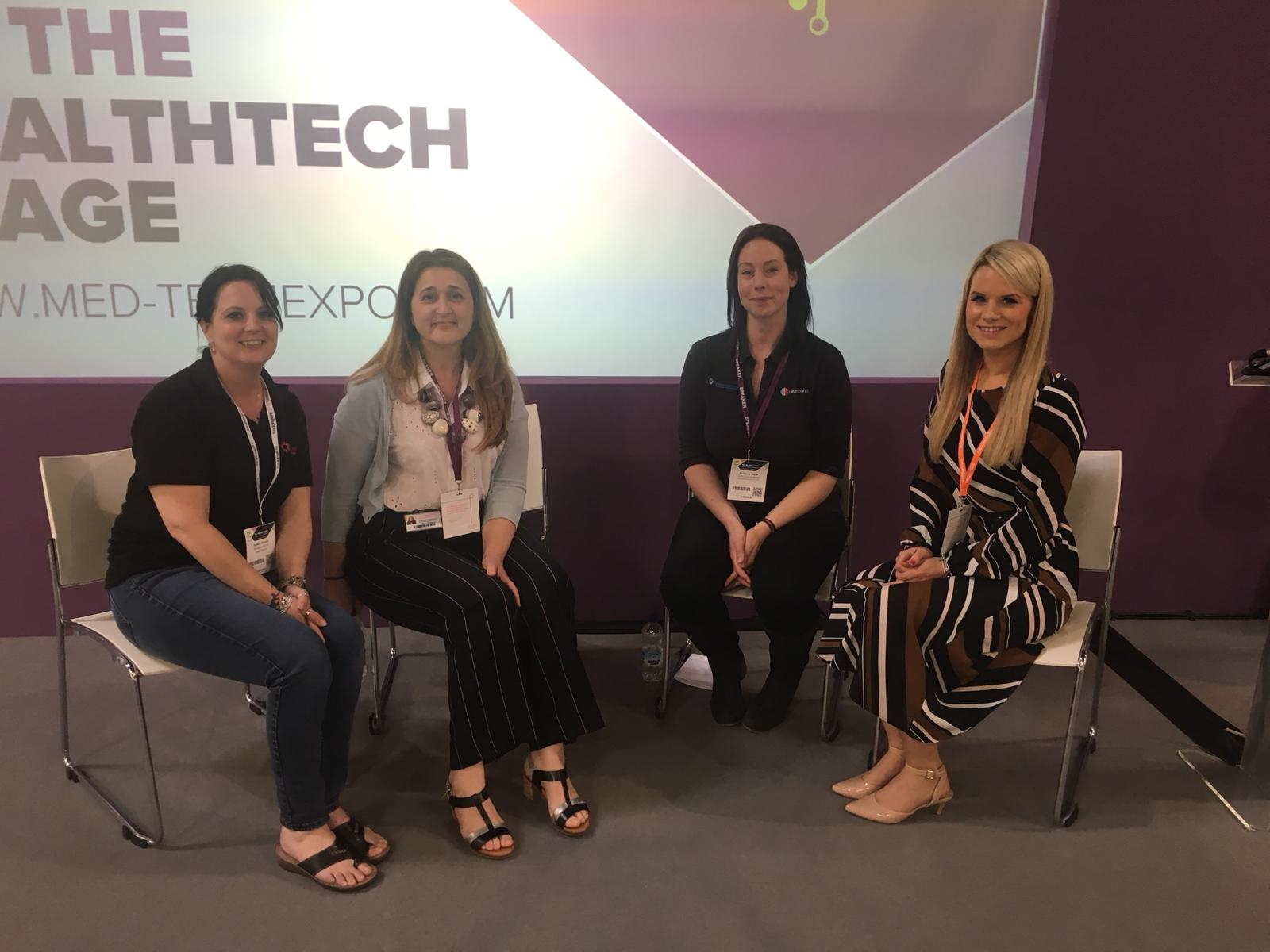 On Wednesday I visited the Med-tech Online show at the NEC to take part in a panel discussion on Women in Plastics, organised by Leanne Taylor, with two other ladies from the industry, Rebecca Smith, National Territories Manager from Connect 2 Cleanrooms and Dr Artemis Stamboulis Senior Lecturer in Biomaterials and Nanomaterials from the University of Birmingham.

Being on public view and speaking to an audience is totally out of my comfort zone, so the initial nerves were raging away. You can see me sitting on my hands to try and stop the fidgeting most of the way through!

However, the seats started to fill and there was a good spread male and females.  First off we discussed the routes we had taken into the industry and I was saddened by the story of my fellow panellist Dr Artemis Stamboulis, who had trained and prepared to take over her family moulding business.  Management instead was given to her male cousins, who hadn’t the relevant experience but were male.

This contrasted with my story, I suppose I was lucky enough to be the only child interested in my family business and my parents shared all their experience to prepare me to take over.  I never really thought dad would retire, but he enjoys it now well enough and they both know the business is in safe hands.

After how we all got into our roles, the discussion went on to more serious sharing of experiences about the more subtle ways that men can demonstrate up that we are ‘in the man’s world’ and thought of as not capable of doing the roles we do.  Such as Rebecca  who has had tape measures removed from her whilst specifying a cleanroom for a client.  I’ve certainly been asked, whilst watching a mould trial for a potential machine purchase whether I like the colour of the machine.  When I answered yes, I was told that was all I needed to worry about then.  These are the things we notice whilst in our roles and I think we smile sweetly and get on with it because we wouldn’t want to make that male feel uncomfortable about their everyday sexism.

Though how will this affect the chances of other females joining the industry?  I found the next part of the discussion very interesting, we talked about role models and how to encourage women to apply for positions within the manufacturing and plastics industry in general.  It seemed to be that it was more likely when there was a female leader in a role, that they would attract and support more females.  So could the answer be, we need more female leaders?  I personally don’t believe that the positive discrimination of women to fulfil a male to female quota is helpful, in fact it can be more damaging to the opportunities of women than at first thought.  Certainly I have experience within BP, where it was decided they needed to actively place Female area managers of engineering functions.  BP reshuffled the business and suddenly there were Female managers, but they weren’t there by merit, they were there to fulfil a quota so they didn’t the relevant experience and expertise,  ultimately most of them failed.  Giving credence to the perception that women weren’t suitable for this industry, ‘we told you so when you recruited her it’s a man’s job’, type mentality.

However, had they done it the proper way (which would have taken more time admittedly), and recruited females at the lower levels, engineers, sales people, lab technicians then supported trained them up through the ranks over time.  They would have found the right females for the managerial roles and they would likely still be there and able to influence from the inside.  It wouldn’t have been overnight like the positive recruitment did, but we are battling a long held belief that women are the homemakers and the men are the breadwinners. It would have been a longer lasting approach.

Back to the homemakers comment, this was also covered in the discussion around women and dare I said the word, babies.  As the owner of a business, I know you cannot take into account when recruiting whether someone is of child bearing age or soon to be.  However, we women who have applied for jobs between our 20’s and 30’s all know that it is considered, even if unconsciously.  It was great to hear that Connect 2 Cleanrooms allow flexibility for their workforce around their children, both male and female.  As a family business I know we do as much as we can to be flexible, because we don’t want to lose the experience of people due to not being willing to work around family requirements.  The discussion highlighted the fact that we all felt that businesses should be as flexible as possible to accommodate growing families, enabling both parents to take part in important things, like the Sports day or Christmas Nativity.  We all felt this could not only be driven by us, as female leaders, but by men.  The majority of families these days have both working parents, so it is the interest of the fathers to speak up and be positive if a female colleague is a mother is maybe being held back for promotion or penalised in another way because they are a parent.  After all we have single parent fathers these days and fathers who do want to pick the kids up from school or care for them when they are poorly, so just as we shouldn’t penalise the mothers, the fathers shouldn’t be either.

The next part of the discussion revolved around the million dollar question, how do we get more females into the industry.  How to we encourage them that actually, manufacturing / plastics / medical research is a suitable career that they can excel at.

Well we all felt that first off we need to encourage a change at school level, when we have these choices of subjects, Maths, Biology, Physics, we need to talk about how those subjects can be applied.  I know when I was at school, the boys did metalwork the girls did home economics, I hope it isn’t like that these days, Andel Plastics sponsor the Race for the Line competition in the knowledge that all the year sevens, boys and girls get the same chance to design and rocket propel a car!

Back to the point… when we get to careers advice, and a female says I am good at maths, in times gone by they might have been suggested, book-keeping, cashiering at a bank.  These days I would hope the bar is raised to accountants, bank managers and financial advisors, but even then, why not engineering? If you can work to two decimal points of a millimetre, or work out a compound angle, why not architect, or toolmaker, Aircraft engineer.  I strongly believe it is these conversations that will benefit our girls most for the future. How can you apply the skills you have and enjoy using to the full market sector with no boundaries.

Which brings me nicely I suppose to my last point, one which I didn’t get to make in full at the discussion.

Why was I the child that went into the family manufacturing business? there were four kids, my sister went into video conferencing, my elder brother onto become CEO of large London banking firms and my little brother into Computer programming.  I  used to think it was because I was a daddy’s girl, but actually I was also a mommy’s girl. My father was the toolmaker, my mother the artist.  So if someone hung a picture off kilter it drove me mad, but likewise if that picture wasn’t a good one? Brain overload.

However, I wasn’t a tom boy, which I think a lot of people believe a female must have been to end up in an otherwise male dominated area. Yes my dad taught me to carve wood and my older brother taught me how to weld and strip an engine, but likewise me and my brother used to make cakes every weekend and my mom taught us to sew and knit.   I do believe it was in my upbringing, there was no male and female jobs or hobbies, no boundaries on that.

So we need to break this perception that, for example if you are interested in aerospace engineering or manufacturing that you must be a tomboy and are somehow less than female.  Likewise I think the media can help us out with the way they word some of their otherwise inspirational stories about women rising to the top of their profession in a male dominated area.  You will often find in articles wording such as, she ‘fought to the top’ she ‘battled her way’ we need to alter these phrases to ‘she developed her skills, she won an award, she earned a promotion.’  We don’t want to discourage female applications because they think it is going to be a long hard slog to get to the same level of a man.  It may very well be, but let us not put them off trying. Too often it can be perceived that you have to be battle hardened to get where you want to get, that if you like stereotypical male dominated roles you must be a tomboy with all those connotations.  Let’s try and change that perception, let us encourage the females of the world to consider all the ranges of careers available to them and go for the one they are passionate about.  To have the courage to back themselves despite whatever odds they think are against them and don’t give up.  Finally, if they need help, let’s hope they find initiatives like Women in Plastics and make contact and get some advice and support.  Afterall, that’s why we started the conversation.